If you are going to Greece you have to stop here. Is beautiful and magical and despite the herds of wild dogs, you will not want to leave.

It is not a very busy area, not even for the Greeks. It has hundreds of routes, breathtaking views, fauna, vegetation, villages lost between the mountains, waterfalls, good food, and fireflies!

Perhaps, for many of you seeing fireflies is not so strange or surprising, to us, that we had never seen them, it was unforgettable. We were spending the night in Vikos Gorges area, on a dirt road and with a beautiful summer night. While walking around with the flashlight we saw a sparkle, a tiny light. We looked at each other and wondered,

It couldn’t be a car as we weren’t so close to the main road. We began to walk towards the light and then we saw another one. Bright yellow sparkles going on and off all over the trees and right next to us. Tends of them.

It was a private show of nature! There we were, in the middle of the night, surrounded by Fireflies.

It was August and we hardly saw anybody walking through the mountains. Sleeping at any site is not a problem, you feel at ease and at peace wherever you stop. It is just you, nature and endless sky above you head.

«After travelling to one place or another you always realize there are still many more things to do there, Pindos is one of those places.» 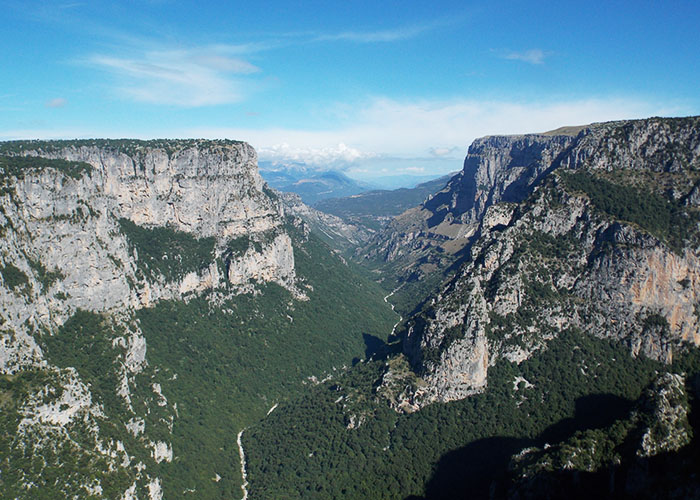 We drive towards Monodendri, and on the way, we will pass Vitsa. Both, small charming villages with cobble streets and stone houses. From Monodendri we drive 15 min on a road which views are an invitation to spot, and at the end of the road we have to park and continue on foot to find Vikos Gorges (Oxia). Where you can see how the green of the trees seems like a river streaming down between the mountains.

After spending the night in the vicinity of Vikos Gorges, and being surprised by tens of Fireflies, we set off towards the natural pools located between Papingo and MikroPapingo. You can walk along the edge the pools, holding yourself on the walls, but the walls start narrowing soon, leaving no space for you to put your feet. At this point, you have to decide if you have seen enough, or if the chilly temperature of the water is not a barrier for you, and swim from pool to pool deeper into the mountain. Go for it!

Next day in the morning, we head towards Vradeto, (on the way we can see Noustsos Bride over the river Voidomatis). Vradeto is the last village we find driving on this road, and after that, we only can continue by foot through a dirt road followed by a footpath, which will take us to a viewpoint over the Vikos Gorges. There is a very authentic bar in the tiny village, if you have a chance, try their local wine and the stew the make. There is nothing better after the walk 😉

We spend the night in one of the street in the village, where we have a second encounter with Fireflies. Again, it was amazing!

The following day our first destination is Iliochori .Once there, the first street of cobblestones on the right hand side, take us down into the square, where we can begin out walk towards a seclude waterfall.

In the square there is a small bar and a water source, in case you need to fill the tank or clean yourself ✌️

At the same time, approaching Iliochori, we will see a sign that says: Kalives Karakatsaneo. It is an open museum where you can see huts where people used to live along with several tools of the time. Entrance free.

You can drive slowly, stop wherever you like to spend the night, and enjoy everything that surrounds you.

Tranquility and nature, a sensation of freedom in a magical environment

Do you want to live travelling in a van around the world?

Watch Out for Bears

We stop a few meters from the main road in a conservation/information building of the natural park, where a lovely girl gives us information about the villages, routes and fauna of the area.

“¿Can we do a walk with any of you in which you have the chance to see bears?”

‘No, sorry, we do not offer this service. But perhaps you see one’. Answers the girl.

“Maybe we see one? What do you mean with that?”

She explains to us that due to the lack of food and decrease of livestock, the bears are getting closer to the villages, and few of them have been seen lately. But she says we shouldn´t be worry if we find ourselves with a bear, depending on the situation we have to act in one way or another,

In the worst scenario, if the bear goes toward you, speak loudly, don`t turn your back, and if he gets too close, extends your arms and roar as high as you can.

I do not know about you but this does not reassure us much. We did several routes along the mountains and although we thoroughly enjoyed it, the idea of bear never left our head.

Watch Out for Wild Dogs

In the mountains of Northern Greece due to the wolves and bears, the herds of goats, cows or sheep are escorted by an entourage of dogs, and they are not Chihuahuas.

The first day we drove into Greece we spent the night next to an abandoned ski station in the mountain. Around here there were two dogs with a not very approachable look, who seemed to be in charge of this territory, barking and chasing every other dog getting closer or car passing by. Even so, we were tired of driving, and this place didn’t seem too bad to sleep so long as you kept the distance with the canines.

We parked the van, and after a few minutes the animals got tired of barking around the van. They left to intimidate other dogs and the two or three cars that drove by throughout the night.

The next morning was a sunny day, good day for having breakfast outside. But as soon as we start setting the table outside the “puppy” starts running towards us, we do not know if he was hungry or he had forgotten that we were here the night before. We were already friends . We have to bring everything into the van and drive a couple of kilometers further ahead in order to have an enjoyable breakfast. We start over again, we take the table outside, juices, tea, coffee, biscuits….and we begin to fry some bacon. In less than a minute we have a herd of dogs walking stealthily toward us, right in front of the van. With the same stealth that they approach, one of us holds the frying pan while the other take the table into the van as it is, with all the staff on it.

The bacon was theirs, we were ready to give it to them, they only had to bark or get a little bit closer and we had thrown it. They were too patients.

A few kilometers up the road we stop again, this time we park the van in a strategic position, if they came we would see them from far away, there would be no surprises. Finally, we can enjoy our well deserve breakfast.

Back on the road and just turning on the very first bent, 3 dogs coming out of the blue start running behind the van. what the hell is it!?

In this area we have seen dogs surrounding cars and bringing them to a halt, chasing cyclers and people hiking on the forest.
Later on, and after all this we were warned by locals, «watch out for wild dogs, and if you hear cowbells or see cattle , be cautious and don’t get too close, people has been attacked”.

Have you been overlanding Greece? How was your experience?